Giveth TRACE has officially been deprecated. After 5 years of faithful service, Giveth and its platform, services and products have fully migrated to Giveth.io. With the deprecation of the Rinkeby network and low user activity, the Giveth DAO decided to sunset its original dApp in Q3 of 2022. The code has and will forever be open-source, and you can find it in Giveth's Github repositories.

This documentation will remain available for historical reference.

This section details the Giveth TRACE development process, deployments, and how merging and testing is handled.

Development Planning, Sprints and Where to get Involved.​

We run on a 2 week sprint cycle with weekly developer meetings to plan sprints and assess progress. You can checkout when the next one is on our Google Calendar and you can also reach out on the Giveth Discord to @moenick the Giveth TRACE project manager. You can find the current Giveth TRACE repository on Github.

Giveth TRACE has transitioned from passive to active development for post-beta release coming soon. There are two deployments currently used for the development process.

The two branches below are being used in the gitflow.

Currently we use the Zenhub Boards extension for Github to track progress on features and fixes. You can get the Zenhub extension here.

The Current Github issue flow is as follows:

Before making new Pull Request, make sure that your code does not have any linter issues and can be deployed. Only PRs that successfully deploy and don't have any merge conflicts will be merged. You can also easily check the deploy preview on Github Netlify autodeploy integration. 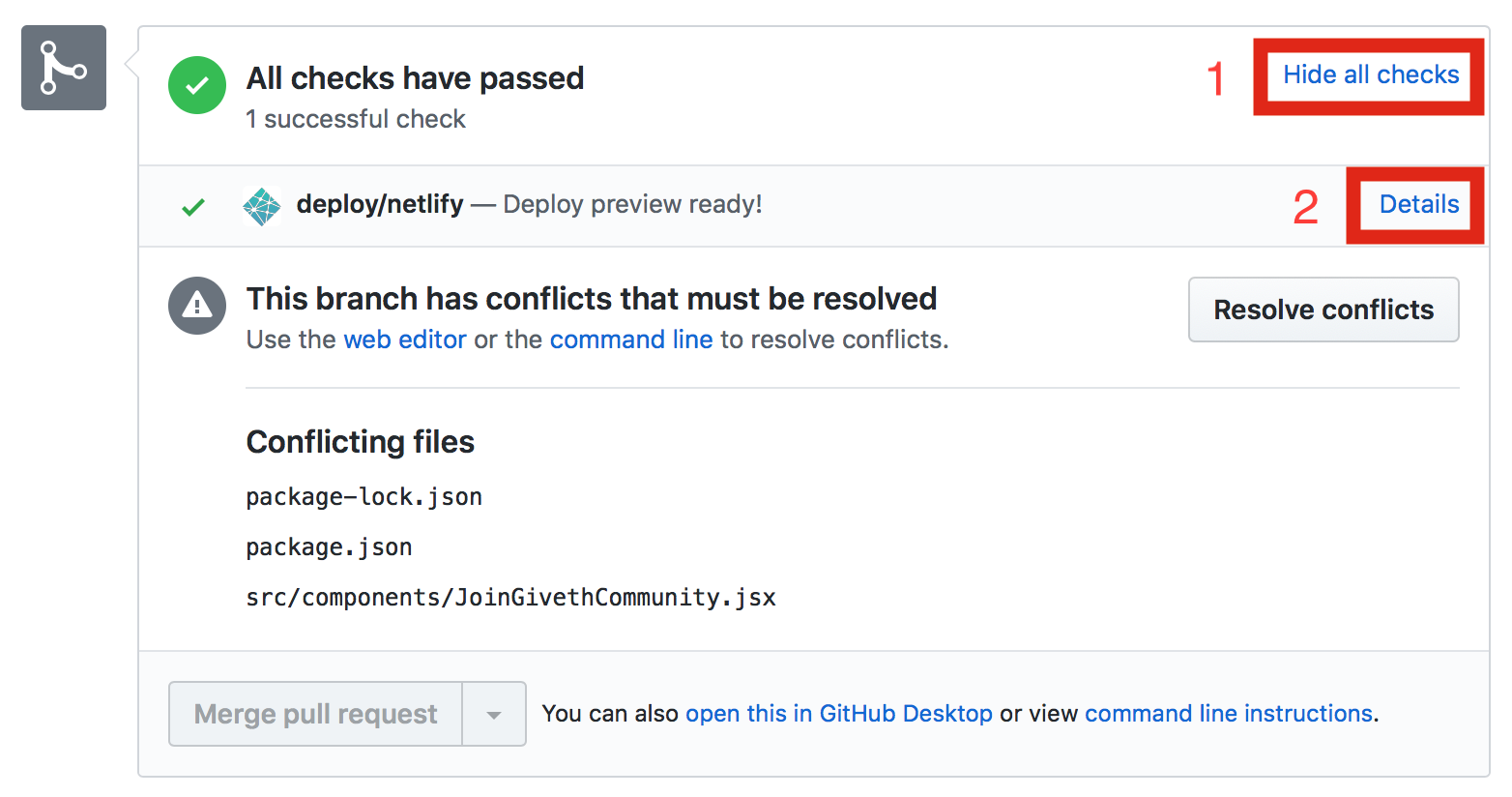 Deployment preview. Each pull request to the DApp repository has a Netlify deploy preview. You can access it at the bottom of the Conversation tab after clicking Show all checks button and Details.

After new features are integrated and dev tested in the develop environment, developers will ping testers with requests or updates in the Giveth TRACE Dev Channel on Discord. Testing should not be done by developers and is open to anyone who wishes to contribute.

Only once all the newly introduced bugs are removed in the develop branch it can be merged to master and pushed to production. It is done manually by DApp devteam (by @aminlatifi and @MohammadPCh).

To deploy the newest version of feathers-giveth

Next, check the feathers deploy status

If the logs are clear, the last step is to deploy the latest master branch commit on Netlify and locking the deploy.

If you're a new contributor and would like more in depth technical documentation on all the Webservices leveraged from the back-end (feathers-giveth) to the front-end (giveth-dapp), check out our pages on Swagger for both Production and Staging deployments:

What is the definition of a feature?

A Feature is any non-trivial improvement (less than 10 lines of code). Most features have issue in the corresponding Github Repository.

Big non-critical fixes are treated just like any other feature. If a fix is time critical, it is created as new branch with hotfix/ prefix as a fork from the master branch. Such hotfix is tested at minimum by 2 people from dev team before being merged to masterand develop branches.

Where do we communicate what needs testing?

The QA testing is announced in the Giveth-1 Dev channel on Discord.

How do we prioritize when tests fail / bug fixes?

Bug fixes are done ad-hoc as soon as discovered during the testing process. The bugs can be tackled by the DApp dev team or external contributors can be asked to help. Bug fixing has a priority over new development.

Who does deployments and how are they deployed?

The develop branch is autodeployed to its environment. The master branch is deployed by the dev team (@aminlatifi, @RamRamez and @MohammadPCh) once there are no new known bugs in the develop branch. The process is manual and there is a deployment procedure.

What is the release cycle frequency?

There is new release every 2 weeks as depicted in the product development cycle gant chart.