Content and ideas have been modified from this excellent article “An Overview of the Giveth Donation Application” authored by Kris Decoodt in 2017. Many things have been revised and modified since 2017. Here we breakdown the DApp as it is in 2022.

We have eight roles in Giveth TRACE. In this section we explain in-depth each role, their function, how to become one and the power each role has.

This refers to any person who visits our website. Without registering as a user on Rinkeby they cannot interact with any Giveth entity nor make donations on Giveth TRACE.

The term Giver describes anyone who uses our platform to give donations to a Community, Campaign or Trace. Givers can interact with all 3 entities but are not explicitly part of any unless they choose to join a Community or assume another role as well.

How to become a Giver​

Power of a Giver​

*Note: Givers can veto or "reject" a proposed Delegation within 3 days of the delegation proposal. This is referred to as a delegation "delay". After 3 days, the delayed delegation will be accepted by the DApp automatically.*

A Community Manager is the registered user owning a Community. They can delegate the funds donated to their Communities. A delegation is a process, where the donation pledged to a Community is transferred to a Campaign or Trace. Once delegated, the Giver has 3 days to reject (or approve) the delegation. After that time, the money is auto-approved and locked in the Campaign or Trace to which the money was delegated.

How to become a Community Manager​

Power of a Community Manager​

*Note: In order to initiate a delayed delegation, the Community Manager should go to the Traces or Campaign page, and click the Delegate Funds button.*

Campaign Managers are Giveth.io users who have chosen to make their project traceable and have passed the project verification process. The role of the Campaign Manager is to create Traces through which they can fund the work of people and the cost of resources behind the project.

How to become a Campaign Manager​

Power of a Campaign Manager​

*Note: A Trace has to belong to at least one Campaign and needs to be approved by the Campaign Manager.*

How to become a Campaign Reviewer​

Power of a Campaign Reviewer​

Traces are the foundation of the Giveth system. Any registered user can propose a Trace to a Campaign. However, a Campaign Manager or Campaign Reviewer must approve the Trace proposed to their Campaign for it to become valid. Traces can represent several types of requests for funding. More info on types of Traces are detailed further in this document.

How to become a Trace Manager​

Power of a Trace Manager​

*Note: A Trace can no longer be edited once it has received a delegation or donation.*

Power of a Trace Reviewer​

*Note: In the case that a Trace is cancelled, the currency returns to the source, i.e. to the Giver for a donation or to the Community/Campaign for a delegation.*

A Recipient is a registered user who will receive payment from their successfully completed Trace. In the majority of cases, the Recipient is also the Trace Manager as they are the one working on the Trace. However, in some cases the recipient is separate, such as for payments to a supplier or a Milestone for a Campaign.

How to become a Recipient​

Power of a Recipient​

*Note: In the case that the Trace has a Reviewer, collecting funds needs the Reviewer's approval.*

Some actions need to be registered to the Ethereum blockchain network. Adding transactions to the blockchain does not happen immediately, so we observe a latency in some actions. This latency depends on the network conditions, for example traffic on the network.

All roles have a limited scope and once an entity ceases to exist, so do the connected roles. Every Community contains exactly one Manager. Every Campaign has one Campaign Manager and one Campaign Reviewer. Every Trace has one Trace Manager, one Recipient and potentially one Reviewer. The Giver is not explicitly associated with any entity but may interact with all of them.

Giveth TRACE on a technical level is a system for managing currency. Terms referring to the movement of funds within the Giveth system are defined as follows:

Giveth TRACE, on a technical level, is a system for managing currency. The DApp’s entities are accounts to which people can deposit, transfer or withdraw currency. We have three entities on Giveth TRACE, Communities, Campaigns and Traces. The relationship between them are defined in the chart below. Each entitity corresponds to one or more smart contracts.

*Note: In Q1 2021 the Giveth team rebranded the entities DACs (Decentralized Altruistic Communities) to simply Communities, and Milestones to Traces.*

Relationship between the DApp's Entities​

Communities, formerly known as DACs, are the most general entity in the Giveth System. The purpose of a Community is to unite Givers around a cause and provide them with the possibility to give money to a cause without having to do the research involved in finding the exact Campaign to contribute to. Any money donated to a Community can be retrieved by the Giver, however we strongly discourage Givers to do so. The funds remain in the Community until they are delegated to a Campaign or a Trace, or withdrawn by the Giver. Community Managers can support any Campaign or Trace by sending currency to the account of the recipient.

State diagram for Community -> Campaign delegation flow, showing how donations made to a DAC are delegated to a Campaign.​

State diagram for Community -> Trace delegation flow, showing how donations made to a Community are delegated directly to a Trace.​

Campaigns are in the center of the Giveth donation system. They are effectively tools to steer money towards the smallest entities, Traces. A Campaign can be supported by more than one Community or by no Community at all. Campaign co-owners can only accept or reject proposed Traces. Campaign Reviewers can cancel the Campaign if the Campaign is bad or no longer active.

Donations made to a Campaign are locked, and unless the Campaign gets cancelled, the Giver no longer has control over the donation. The reason we lock the donations is to give the people behind the Campaign some level of certainty that they can count on getting the pledged donations and pledge them to one of their Traces.

State diagram for donations made to Campaign.​

The main building blocks of the DApp are Traces, formerly known as Milestones. A Trace is the only way by which funds can exit the Giveth system. Traces must be created inside of a Campaign. Compared to a Community or Campaign, Traces are more complex because more roles can interact with them.

To tailor Traces to meet the specific needs of Communities and Campaigns, there are certain rules that can be applied.

Based on these rules we can have four types of Traces with their own distinct properties: Milestones, Bounties, Expenses and Payments.

Important goals or events for a Campaign. Any funds collected in Milestones go to the Campaign that it is a part of.

The Lifecycle of Milestones in the DApp is as follows: 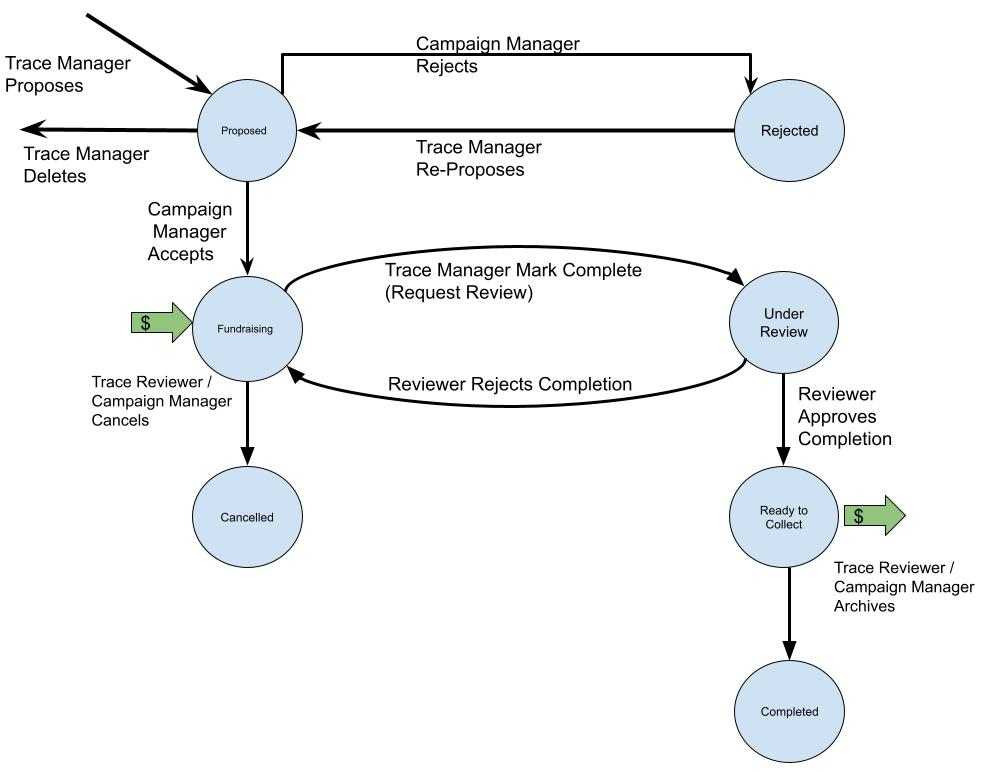 If a Campaign or Community needs to outsource work to be done, they can use a Bounty to compensate contributors for completing specific tasks.

The Lifecycle of Bounties is as follows: 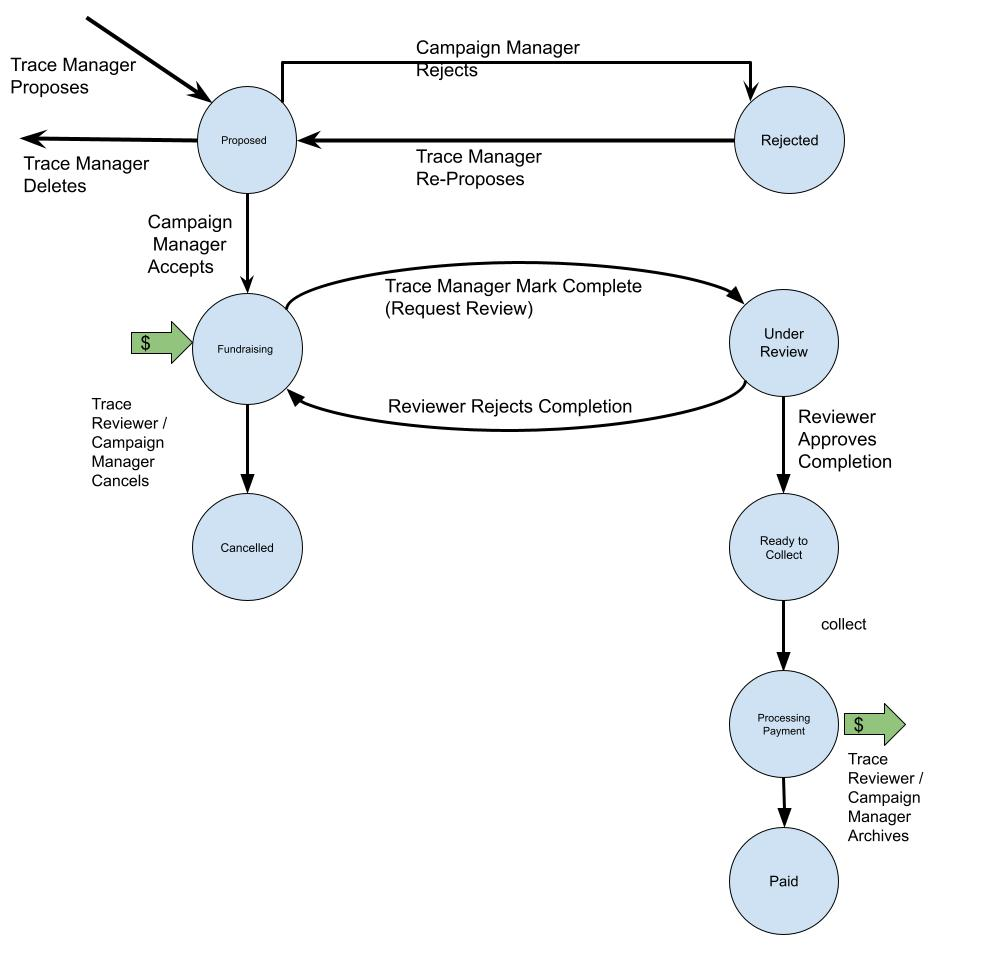 If there are recurring or singular expenses that were paid by a Campaign or Community Member, they can be tracked and reimbursed by this Trace.

The Lifecycle of Expenses is as follows: 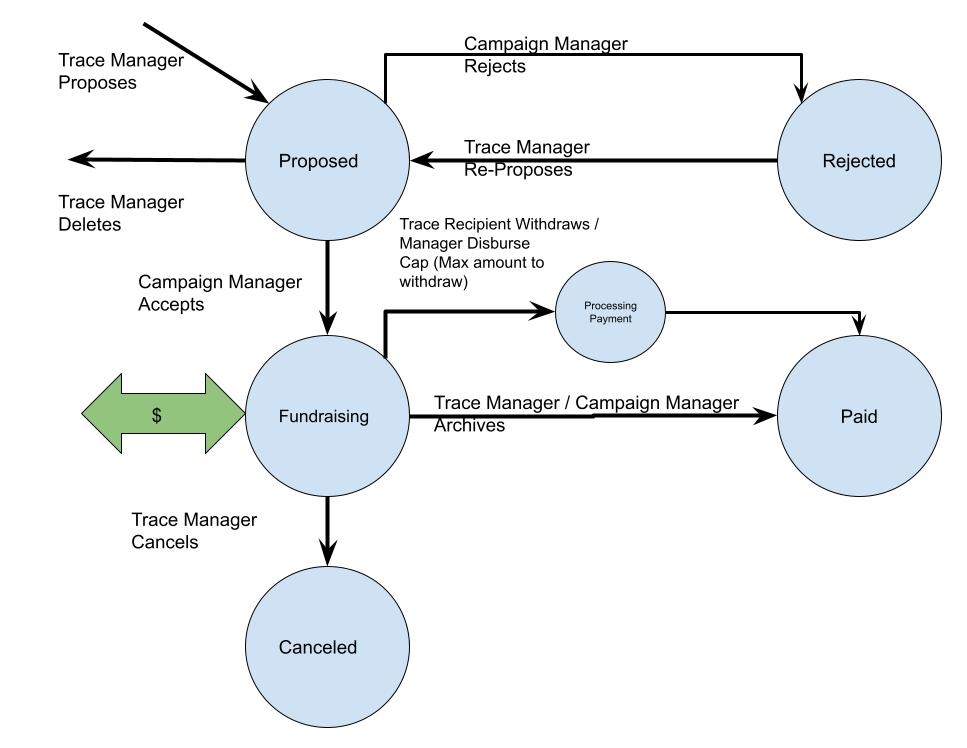 Payments are compensation to Campaign members for the work they have done. Payments can be uncapped or capped for the funding they can receive.

The Lifecycle for Payments with NO cap is as follows: 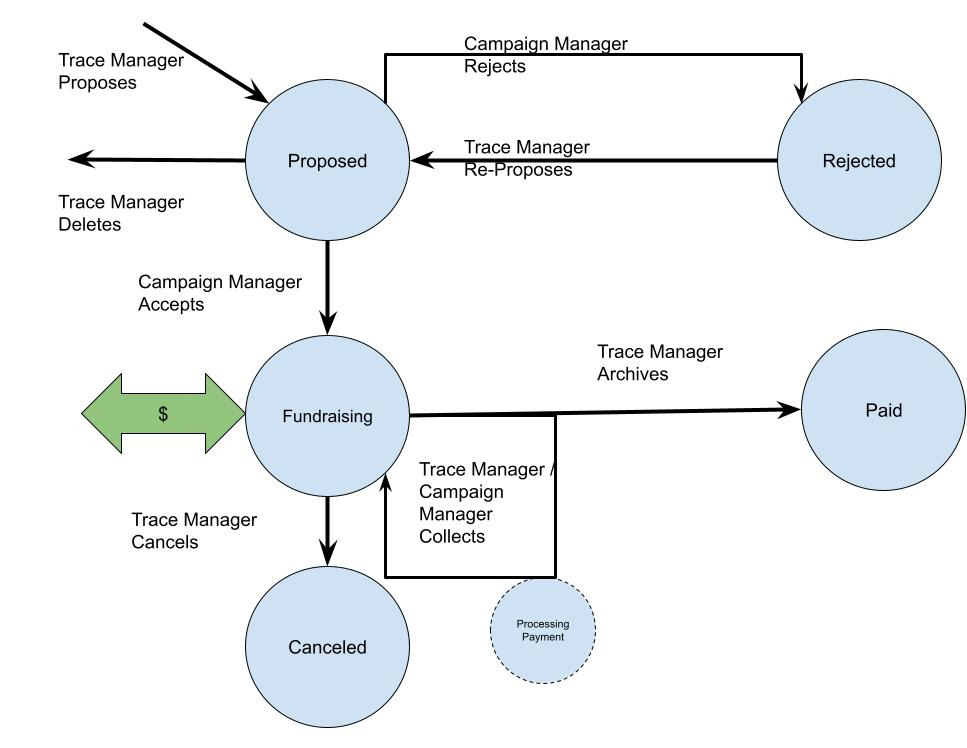 The Lifecycle for Payments with a cap is as follows: 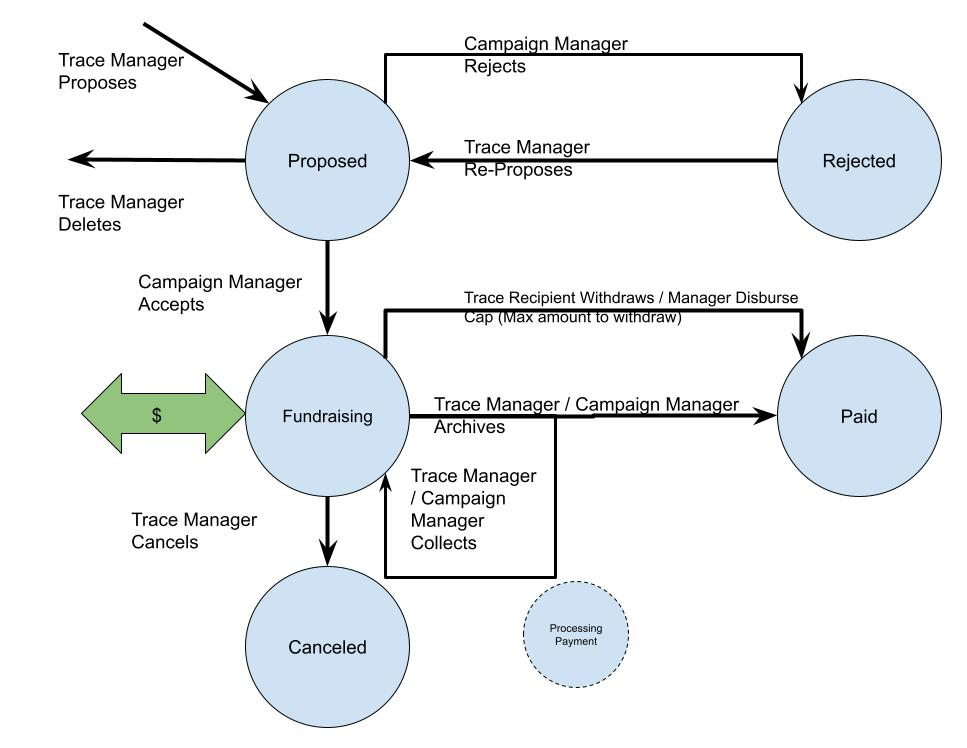 A breakdown of their functions can be summarized in the table below: