The Angel Vault is a strategically managed Univ3 position structured to protect GIV from downward volatility. It is managed by our Angel Vault multisig, a 4/7 multisig of Giveth core team members and two members for ICHI. To learn more about Angel Vaults and how they work, please refer to ICHI’s documentation.

oneGIV is a Giveth Branded Dollar (by ICHI) that can be minted using DAI at a 1:1 ratio. This can be done via ICHI’s website. To learn more about ICHI’s branded dollar, please refer to their documentation.

oneGIV is minted using 100% DAI, and is also over-collateralized by GIV. The contract holds GIV as additional collateral in case there is some issue with the DAI. All mints & burns of oneGIV happen via a contract managed by our Angel Vault multisig.

Over time, the Giveth DAO may vote to change the minting ratio from 100% DAI to a combination of DAI and GIV (e.g. 80% DAI, 20% GIV). However, to keep the peg to the dollar, burning oneGIV to redeem DAI will always result in 100% DAI.

Liquidity providers can add liquidity to the Angel Vault using oneGIV via ICHI’s website, and then stake their LP tokens in the GIVfarm. Because this oneGIV is added to a oneGIV / GIV Univ3 position, when you remove liquidity you will get oneGIV & GIV proportional to the holdings in the Angel Vault.

The APR shown in the GIVfarm oneGIV/GIV staking pool is the sum of these two reward rates.

A total of 6 Million GIV has been allocated to run a rewards program for Angel Vault LP stakers for 26 weeks from the start date August 4, 2022. The amount of rewards being sent out throughout each two week period is as follows: 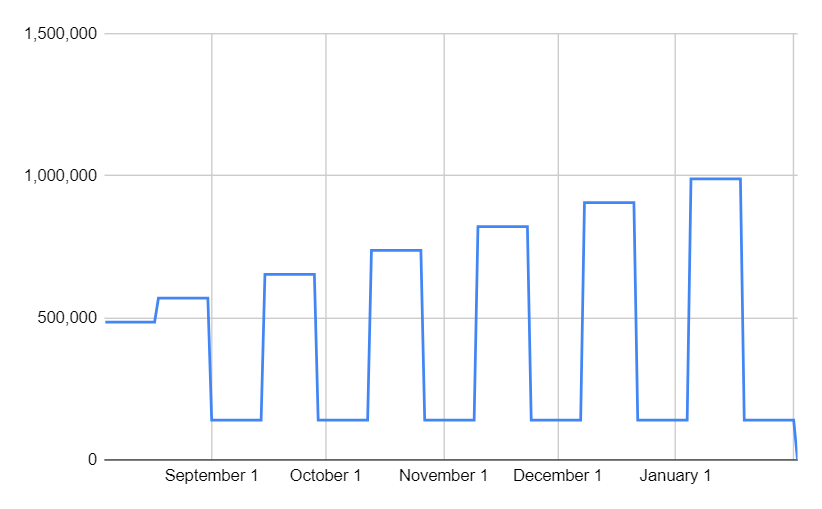